Not to be confused with: Vahl Kahli.

"I made, yes, a Dark Elf, and yes, it's a girl, I know you can tell it's a girl. Girls are better than guys, it's just-it's just truth, okay? So this is our character along this journey, her name is Vahl, spelled V-A-H-L."
―Jordan at the first episode of A Skyrim Tale.

Vahl Aradur (Pronounced /vāl-er-ə-dər/ or /vale-air-uh-dur/) is a female Dunmer Lycanthrope Dragonborn, later High Queen of Skyrim, as well as the main protagonist of A Skyrim Tale. She was born in Vivec City, Morrowind along with her twin brother, Gaelan Aradur, in the year 4E 176. Vahl was the host of a voice in her head (Jordan) and it caused her many a misadventures. She is the leader of a rather large company, stemming from the First Dragonborn, Miraak, her friend and housecarl Lydia and a young inventor, named Poet. Vahl has taken a liking to Skyrim's local Deer population, and collecting Nirnroot whenever she came across from them. She has developed a fear for the local Spider and Troll population during her time in Skyrim and she shares her brother's hatred for the Thalmor, the ruling faction of the Aldmeri Dominion.

Vahl was born to Redoran Soldier, Teldris Aradur, and his sorceress wife, Llorva, in the year 4E 176. She had a twin brother, Gaelan Aradur, and the two were inseperable. When they became old enough, Vahl and Gaelan were mentored by their parents in various skill areas. Gaelan became a Spellsword, while Vahl was trained by their father to wield a sword and shoot a bow. Even at a young age, Vahl was an adventurous spirit and would venture out in the ashlands to quench her thirst for adventure.

During her later teen years, Vahl became a sellsword in Vivec City, protecting caravans, putting down various threats, and taking care of jobs the Redoran Guard were too busy to deal with.

By the time she reached the age of 24, her brother disappeared during his routine ingredient foraging. Vahl was heartbroken to say the least and left to travel the world and find work elsewhere.

This led her to be recruited as a deckhand on the ship "The Skinny Horker" that was bound for Skyrim. She had spent a few months on the crew before the ship wrecked off the coast of Northern Skyrim. Being the sole survivor of the wreck, Vahl decided to start a life of Skyrim, but she knew little of what would come of it.

Vahl's start wasn't an easy one. Having started with next to nothing on the coast of Skyrim, she proceeded to make her way travel the countryside and eventually found herself in Riverwood. A small mill settlement within Whiterun Hold.

Lydia first came into Vahl's service after the latter became the Thane of Whiterun. The two became close friends and comrades-in-arms. When Vahl is away, she trusts Lydia with the well-being of the entire group. Vahl was devestated when Lydia was captured by the Afflicted and subsequently put down by Miraak, though while this did not damage her relationship with Miraak, Vahl did express great anger towards the Afflicted.

Lil' Vent was Vahl's pet rabbit with an unusual talent of lockpicking. He went missing during the year 4E 202 and was later confirmed to have fallen. He currently resides in Sovngarde.

Miraak and Vahl had a rough start with the former attempting to free himself by claiming Vahl's soul. That in combination with the fact that he would steal the souls of the dragons she had killed, then belittle her achievements as Dragonborn, led Vahl to harbor a deep hatred towards her predecessor. In time, Vahl and Miraak fought a duel at the Summit of Apocrypha where Vahl emerged victorious, and spelled Miraak's death. However, Miraak was brought back to life by Akatosh to redeem and aid Vahl against Alduin. The Dragonborn duo would share in many adventures together, and this would lead to her not only growing to respect and care for Miraak, but award him as the title of her Second. They would go on to defeat Alduin, and Miraak now serves as a mentor to Vahl. Teaching her how to harness the power of a Dragonborn, to the fullest potential.

Frea became a good friend to Vahl after the latter's adventures in Solstheim. She was very reluctant to join the group after her father was killed by Hermaeus-Mora, eventually, Frea relented and joined the group and aided Vahl on many quests such as Vahl's exploits on Solstheim as well as her participation with the Dawnguard.

Jenassa is a Dunmer sellsword from Whiterun that Vahl hired. She serves as the group's assassin. Not much is known about her, however she and Vahl get along quite well. Eventually Jenassa decided to retire from Vahl's services, but would always reflect back on her time in Vahl's company.

Venturian, or Jordan, is the voice in Vahl's head that directs her in the right (sometimes wrong) direction, they have disagreed with a lot of things, but Vahl trusts him for the most part.

Poet is an engineer who Vahl picked up when she was in Riverwood. Poet is the youngest member of the group and Vahl has a bit of a protective side when it comes to her. She refused to allow Poet participate in the Skyrim Civil War, but was more than willing to allow Daxius, the Dwemer Centurion Poet had constructed, to fight in Poet's stead.

Vahl started out being annoyed by Serana, although Vahl later warmed up to her and now enjoys her company. Vahl aided Serana in stopping the prophecy Serana's father, Harkon, tried to initiate where the Sun would be permanently blocked, allowing the Vampires to strengthen and rule the land.

Even though not mentioned by name in the series, Gaelan is Vahl's elder twin brother. Prior to Vahl's arrival in Skyrim, she believed Gaelan to be dead, but in reality is serving as a Captain in the Stormcloak Army. The two later reunited off camera, and Vahl would aid her brother in the Civil War, serving as a honorary member of the Stormfist Battalion.

After Vahl got a house in Windhelm she adopted Sofie, the daughter of a deceased Soldier under Gaelan's command. Vahl thinks Sofie can be spoiled sometimes, but loves her all the same. She eventually passed down her Crow Sword to Sofie, implying that the latter will also become an adventurer like her adopted mother before her.

After Vahl vistied the Whiterun tavernm she met Ma'isha and soon adopted her. Although not much is known about her, she does have a rabbit for a pet. Ma'isha is a bookworm and Vahl's responsible child, possibly becoming a mage. She would grow up to be acting High Queen in Vahl's absense, being tutored by Gaelan and having him as her royal advisor.

Though not really considered apart of the group, Vath has caused a lot of trouble for Vahl. Vahl even had to go to prison just to free Vath of his crimes. Vath is known for walking around in circles and making Vahl angry.

Vahl found Elsa in her ice castle with Olaf and had the Ice Queen follow them for an adventure. Elsa also grows tired of (the voice's) Frozen puns, she also blocks out doorways with her ice crystals.

There was a poll up on the VenturianTale Facebook Page, on what race Vahl should be, Jordan said Dark Elf won by a landslide, and Khajiit won in 2nd place.

After Jordan's long break from A Skyrim Tale, all of Jordan's Mods for Skyrim have been removed, making Vahl remain with the design of a normal Dark Elf with no hair. This was later fixed, however.

Vahl's name must have been an idea leading to this: VenturianTale, remove the -enturianT- part of it and the result is "Vale", change around the spelling to a more Elven form, and the result is: "Vahl".

Vahl was named after her ancestor Vahlok the Jailor.

the pronunciation of Vahl is: /vāl/ or /vale/

Vahl has been wearing many different outfits and has had many differences through the Game, here are some pictures of how Vahl has changed overtime. 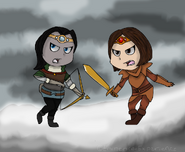 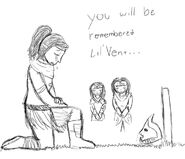