Susie Gumball is the wife of Jack Links and adoptive mother of Marry. She is a rare case, in which is played by two members, by BethanyFrye and ImmortalKyodai. Her actions are almost identical to Gertrude's, which is her equivalent in the normal Acachalla Family. She keeps trying to help her son, Marry. Like Gertrude, she is very calm compared to the rest of the family (not as much as Gertrude, Susie is more active). She adopted Mary, before Jack knowing it, as well Gertrude did with Sue. Susie also always hold a melee weapon, but instead of running everywhere with a crowbar in her hand, Susie keeps walking and throwing her harpoon to really random places, killing the first pet that Mary had (a seagull). Because of this, another seagull appeared, and growed into a huge size, and turned blue, showing that the birds are powerful in every Dimension, not only in the "Normal Earth" Dimension (some think that the Earth is in the 1st Dimension, but according to Jack, "people in 1st Dimension wear bricks in their heads", something unusual in Earth).

As Gertrude, Susie is calm and sane, but Susie still has some important differences, such as:

Susie looks exactly the same as her husband, Jack Links, but wear yellow clothes, instead of her husband blue; she even has a mustache and beard. She has white skin, blue eyes, and is sort of fat (not as much as Papa Acachalla). Because of her cap, you can not see much her hair, but due to she having a blond mustache, a beard and eyebrows, it can be assumed that she is blonde (or bald, like the Papa Acachalla). Her eyebrows are really big and messy, as for her mustache, but her beard is thin. She wears a yellow jacket with a zipper, and pinkish/grey trousers, and wears brown shoes.

Susie seems to really love her son, Marry. She always tried to help him, and discuss with Jack when he is mad at him. Apparently, Susie likes Marry so much because she was the person who adopted him.

Jack is Susie's husband. They love each other, like Gertrude and Papa Acachalla. But however, instead of knowing each other in a shop, Susie as being a fisherwoman, literally fished Jack, because he is a merman. After this, they started to love each other, and then they get married.

Susie and the Gnome seem to act friendly at each other. The Gnome is Susie's father-in-law, and both don't talk so much, but when they do, it's a normal conversation, but sometimes Susie still stranges why is he so tiny and weird.

Susie is different from Jack on this point. While he dislikes the normal Acachallas, his wife thinks that they are pretty normal, and know that they are very similar to them, even suggesting that visiting them would be a good idea. 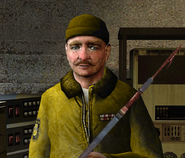 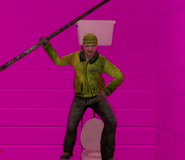