View source
watch 01:36
We're Getting Mutants in the MCU - The Loop
Do you like this video?
Play Sound

Poet, or as Jordan calls her Poe, is an "anime" character who followed Vahl in a Skyrim Tale. She first appeared in episode 86 of the series and is an engineer. She is Venturian's favourite follower in Skyrim. As she is an engineer, she has created a Navigator, a robotic firefly (which follows her around) and a Dwarven Rifle. Poet has been officially shipped with Vahl's nephew, Areum. She is a series regular on A Skyrim Tale. She is an ancestor of Cywren Caster, the main character of A Fallout Tale.

Poet was once just the Engineer of Vahl's Crew, until she was proven to be the favorite of the group and to be an adopted daughter of Vahl.

Miraak  and Poet seem to be the series' biggest contrast, with Miraak being the oldest and strongest member and Poet being the youngest and weakest member. Despite this difference, Miraak has a soft spot for the young inventor, treating her more kindly than he would the other members, buying her gifts for her birthday and even donating a sample of his blood for Poet to use in her cloning experiment (this would prove to be disastrous). If anything, Miraak can be considered Poet's best friend in the series as she expresses concern over the whole Miraak/Anna relationship.

Poet has been officially shipped with Areum, and the two are now boyfriend and girlfriend.

Cywren is Poet's descendent and is the main character in Fallout tale, the sequel to A Skyrim Tale. Also she has influenced Cywren's love for the sword/skills with guns and her smarts and ingenuity and bravery but also unfortunatlyy her strength which as you know isn't much. 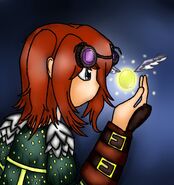 Poet and Daxius on Poet's Birthday

Poet Forging something inside the TARDIS

Poet on the cover of MURDER! - Skyrim Tale Ep. 139
Community content is available under CC-BY-SA unless otherwise noted.
Advertisement