TBA
Peter Macaroni (born Peter Parker), ​also known as Spider-Man, is a masked superhuman vigilante. He helped Joey Macaroni find his Papa Mac, and is the father of Joey. He was a President of (presumably) the United States.

The video appears to be Spider-Man's first day, trying to get phone numbers from citizens, and swinging around a futuristic New York City. However, he is defeated by The Litterer and resigns.

The case of the clogged Toilet (Gmod The Amazing SPIDER MAN Marvel Mod!)[]

Spider-Man was walking on the streets, when Joey came to Parker yelling about his balloon being lost. Spider-Man jumped into the air and said he would find it.

Spider-man face-planted onto the ground and broke his nose, but got Joey's Balloon. Joey, making a pun, 'You mean your nose, Ballooned up? HA HA HA!' got his balloon from Spidey. He then yelled 'Spider-man! Spider-man! I popped my Balloon! I popped my balloon!' Spider-Man asked for his name, and he said 'My name is, Joey Macaroni!' Spider-Man asked where was his papa, and he said he has never seen his papa for 15 years. Spider-man agreed to help find Joey's Papa. Spider-Man then said he needed to go to the store to buy Toilet Paper. They then start flying in the air in circles to find the store. Spider-man stopped at a brick house and told Joey he needed a Plunger and Toilet Paper. (Note: A couple seconds after Spider-man said that, you can see a giant Papa Acachalla and Billy in the Skybox/background.) Spider-Man notices this. A couple minutes later, Spider-man tells Joey to stay and he would get his stuff from the store (which was a dumpster), and Joey said he would stay in the car (Which didn't exist). Spider-man finds his things and hops to Joey. Spider-man puts his things under-ground and heads to find Joey's Papa. Joey mentioned that he heard his papa was in town, and he said 'We're gonna find him.' They head inside and building were Spider-man says he seen a man named Mac 15 years ago and was heading north to the Shop called North. Joey heads outside and uses his leaping skills to jump across a fence. Joey then heads off to a alley and says he knows were north is, a legit Dark alley. They find the Box called north. Joey's papa wasn't there. Spider-man said he was mistaken. He then calls Joey to a building and they see Joey's Papa/dad entering a building, stealing the froot loops. Spider-man saw that he had a bag of money and Froot Loops. They both chase him, but give up and  sit on a bench and 'Chill'. Spiderman then suggests that they never saw his father and are just in a empty city. Spiderman then says he never seen anyone but Joey in his entire life (Implying that he might not be spiderman, and just some lost cosplayer). Joey shoves his face in a wall and tells Spider-man to check out some crates.

When Spider-Man got there, a man (that looked like a bear ripped of his face, or a burnt corpse) was moving boxes. Spider-Man asked he was named Mac, And he said that was his old name, his name was Mac Mac Macraroni. He tries to leave, but Spider-Man said his son was looking for him, which made Mac change his mind, and say he forgot about his son. They head their way back to find Joey sleeping with his face in a Fence post. Spider-Man then wakes him up. But, the video comes to a plot twist, Mac Mac wasn't his father, HE was. They both jump in the air in happiness, but were both killed when they landed. The video goes on (unknown if its the same plot) with a citizen meeting a man named Mr Rotted face and/or Uncle Rot face, Then he tells him he can't remember anything. Joey said (indicating that its the same plot, some time before, or they all came back from the dead) that he forgets to use a plunger sometimes, then Uncle Rot face says 'So you're the man that clogged that toilet!', and Joey mentioned the Case of the Clogged toilet, or CT. Spider-Man appears, saying if he was really the one that clogged the toilet, he was gonna have to arrest him, then they got into a battle. Joey then jumps at extreme levels to try to get out of the city, but missed and died.

Spider-Man is called in by Sammy Sammy to protect the family, but is killed with everyone else.

Spidey films a reality show with his son.

He worked as a comic vendor, selling Firework Comics.

How he was elected or how long his term was is unknown, but he did send ISS members to hunt down Tony Stark. He was escorted by Secret Service once, while under fire from terrorists, getting killed almost instantly.

Spider-Man was present when Johnny Ghost bonded with the Venom symbiote, joining forces with Venom to terrorize the city and help a few citizens in need, which ended in them chasing down two children who tried to kill Spider-Man with a harpoon. He and Venom were later lectured by Iron Man, who told them to stop picking on the townsfolk.

Inspired by Iron Man's speech, he swung away and got rid of the black goo that slightly darkened his costume (implied to be a symbiote of his own), helping Baldi move his collection of books to the library before being killed by Venom several times with a grenade launcher.

Spider-Man and Venom both found themselves in the Little Butts North Carolina Penitentiary, presumably for the former's vigilantism and the latter's supervillainy, kept in line by officers Fred McFredjoy and Kirby Cop.

Spider-Man caught an incredibly lethal virus while imprisoned, presumably from Fred, who showed similar symptoms. He killed McFredjoy with a train, before presumably escaping prison alongside Venom.

A Spiderman burnt to a crisp by Isaac

Spiderman in Just Cause 2 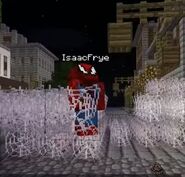 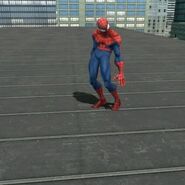 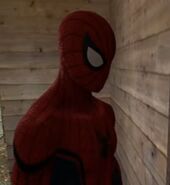 Spiderman poster, as seen on the thumbnail of SPIDER-MAN MOD! - Just Cause 2 Gameplay 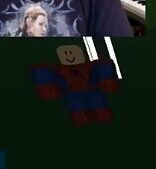 Another shot of Peter unmasked. This one lacks Tobey being edited onto his face.
Community content is available under CC-BY-SA unless otherwise noted.
Advertisement