James Michael Frye is the husband of Paula Frye and the father of the VenturianTale kids. Very little is known about him, as he never appears on any YouTube videos made by VenturianTale or Paula, but appears in several Frye family pictures.

What could be his only known quote ("Why did he say 'argh'?") was heard in the video Cierra's Bat, which is a VenturianTale childhood video uploaded by Cierra Frye on her channel on April 24, 2009.[1] Other than that, he has never been heard or seen in any other videos. 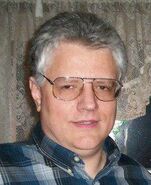