Light Zeron is a guy who worked as a security guard at Chuck-E-Cheese's before changing to work at Freddy Fazbear's Pizza. He was born on the planet Zeron, and later left at an orphanage on Earth by Johnny Toast somehow. Light Zeron was destined to be a night security guard. He has undergone many changes, such as becoming a vampire and getting pale skin. He is known for being a great night security guard.

After working at Chuck-E-Cheese’s for quite some time and deciding to branch out, Light Zeron came to work at Freddy Fazbear's Pizza as a nightguard veteran and found himself working with a co-worker. He told him to pledge allegiance to Light Zeron, but they both died before they could finish it. Zeron is stuffed into a Freddy suit upon death and becomes an animatronic, pledging his allegiance to Freddy, Bonnie and Chica. He attempts to kill his co-worker, creating a theme song in the process. He then gets killed in animatronic form, turning back into a human. He is then killed again.

Light Zeron then had a deathmatch with 2 miis, with all 3 getting killed regularly. And when Zeron starts to boast that he will win, he does! He uses his cellphone to launch explosive boxes that he kills the miis with. After a few wins and a few losses, the 3 nerve gas the entire map before killing each other with it.

Light Zeron had a war against the animatronics while adding to and singing his theme song. He started by killing Bonnie, Chica and Foxy with machine guns. He also lights up the place with colorful rainbow-like lights before he is killed by Foxy. In the end, Zeron wins the war by killing Chica.

Light Zeron, Sally and Maddie friend introduced Domo mattress to Black Lake high school, only to find the school is filled with Domo mattresses, making Zeron sad because he thought he was the popular guy. Maddie introduces the school with a speech, which Zeron interrupts constantly. Domo mattress then starts to say Zeron is annoying and weird, angering him so much that he summons a Domo dragon to kill Domo mattress. More Domo dragons then come to try and take Domo mattress back to his home of Japan to work for their government, which he was trying to run away from in the first place. Maddie kills Zeron, who then nukes the place, killing all the Domo dragons, burning Maddie and Sally's skin and sending one of the Domo's, called Moro, back to another world.

Johnny Ghost and Johnny Toast were sent to help Light Zeron make a documentary about the darkness behind Freddy Fazbear's pizza. With Toast as the director, Ghost as the cameraman and Zeron acting abnormaly, Ghost begins to question if Zeron's even alive. Zeron keeps beckoning to Toast and singing his theme song, but the 2 think it's all part of the show. Zeron then sits upside down on a chair, making it fall over and break his spine. Ghost then starts to point out that Zeron is acting strange. They then leave the office and resume filming in the bathroom. Zeron then gets stuck in a bathroom stall and can't wash his hands because there is no water. They are about to move to the dining room to film him eating when Zeron reveals he has become a vampire and wants to kill toast for leaving him at the orphanage, saying "Your past is a lie, Johnny. Your past is a lie. I know who you really are." Ghost then fires a rocket launcher at Zeron before he and Toast flee. They get into Ghost's car, but he doesn't know how to drive. They accidentally crash into Zeron's car, leading Zeron to slam his hand down on Ghost's car. Killing ghost and leaving Toast alone.

Judy Hopps and Nick Wilde were sent to investigate the death of Light Zeron. They interrogated Spooker, Chakalata soup, Simpleton, and Papa Acachalla, who stole Zeron's body and ran off. Nick and Judy are about to arrest Papa when Zeron wakes up and reveals he was just sleeping because he is a vampire/worm. He then threatens to kill Papa for stealing his bubble gum, making Papa flee. It is then revealed that Judy killed a child police officer and stole his/her suit to be on the force. A policeman comes and tries to arrest Judy and Nick. They run, but Judy comes back with a potato, which zeron says is his space capsule to get back to his home of Zeron. The policeman arrests Judy while Zeron floats back to his planet, saying "lights are on".

Originally, Light Zeron was very egotistical and bashful, taking chivalrous pride in his job and constantly expecting others to praise him. Though not absolutely evil, Light Zeron was capable of anything if his pride was threatened.

As a Vampire, Light Zeron became emotionless and soft spoken, barely reacting even when physical harm was brought upon him, such as when Ghost fired an RPG on him. In a way, Zeron has also become a bit of a psychopath.

The old Light Zeron playermodel had pale skin, was bald, had no shirt on and only wore black pants.

The new Light Zeron ragdoll also has pale skin, a purple jacket with a hoodie, matching pants, a black undershirt, black shoes with white soles and purple hair and is often in an oddly bent position. 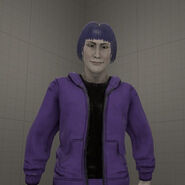