VenturianTale Wiki
Register
Don't have an account?
Sign In
Advertisement
in: Unsourced quotes, One time characters, Gmod Characters,
and 14 more

Katrina is a deceased friend and possible love interest of Johnny Ghost.

She was a girl whom Johnny Ghost and Johnny Toast knew and went to high school with. She died very young and later appeared to Ghost and Toast during one of their PIE investigations. She appeared in the Gmod Scary Ghost HUNT Horror Map! Part 2 (Garry's Mod) and Gmod Scary Ghost HUNT Horror Map! Part 2 FINALE (Garry's Mod) videos as a ghost, and was mentioned in Prop Hunt Episode 19 and Gmod SUPER-POWERED BABY Mod! (Garry's Mod). She also possibly appeared during the Elevator Source portion of the VenturianTale 5th Anniversary Livestream.

Katrina was a friend of Ghost and Toast during their youth, who apparently died young (late teens to early 20's based on her ghost's appearance), which severely traumatized Ghost.

It is unknown how she died, but many fans speculate that it has something to do with Jimmy Casket.

In 2014, in an attempt to contact Ghost (who by this point was a member of the Paranormal Investigators Extraordinaire) she unleashed several other ghosts and zombies (including the Norwegian Monkey and Jeremy Acachalla) in the Black Diamond Facility in order to get his attention. However Ghost and Toast were caught in a time warp at the time and were both also zombies; however he recognised her when she revealed herself, though he refused to believe it was her, insisting she was a ghost preying on his memories. Toast also recognized her, though Ghost insisted they had never met. She appeared to them several times during their investigation. 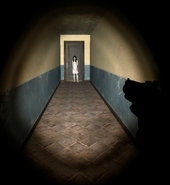 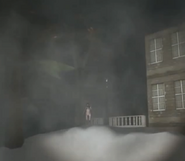 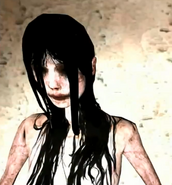 Fanart by ThisIsMysterical on DeviantArt 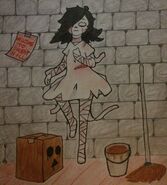 Fanart by ChildOfJupiter on DA

Not much is known about her personality, as her only (posthumous) appearances are very brief. However she seems to prefer to stay in the shadows herself and is rather silent.

Katrina and Johnny knew each other for an unspecified amount of time before her demise. They seemed to have had a close relationship while she was alive, as evidenced by Johnny's distress at her appearance and revealing that he had to come to terms with her death. He said that talking about her left him "on the edge of a mental breakdown" and stressed him out, hitting the furniture with a stick and saying "stab stab stab". Katrina seemingly had more interest in trying to talk to Ghost than to Toast. It is highly unlikely that Katrina and Ghost were in a relationship because Ghost has stated that he "Has never been in a relationship with a female", although this could just be Ghost still in denial of Katrina's death. However, when PIE was later auditioning a replacement for Johnny Ghost, one of the roleplay scenarios faced by a candidate (in this case, a Johnny Ghost cosplayer named Mabeline) was in dealing with the ghost of a long-lost love.

In the Elevator Source segment of the "VenturianTale 5th year ANNIVERSARY Live Stream!" an older version of Johnny Ghost travelled back in time in a female body and got into a time-travelling elevator with the PIE team to convince them to bring his past self back to PIE. On one of the floors they went on they came across a room with the body of a woman crawling out of a coffin-like box, heavily brutalized and apparently possessed (or possibly reanimated after death), having pure white eyes and moving in short, puppet-like bursts. Ghost then noticed her and responded with "Katrina?" as she put her fingers to her head imitating a gun and actually shooting herself in front of Ghost as the doors closed. However, Johnny Toast insisted that the person resembled his cousin pulling a prank and tried to laugh it off.

Katrina and Toast do not have much interaction. Toast did try to speak in Ghost's place, though she quickly vanished before any communication was made. According to Ghost, Katrina and Toast never met; however Toast seemed to know Katrina better than Ghost, which suggests otherwise.

Katrina's two-episode story arc (which has not been resolved to date) came about as a result of the VenturianTale crew playing through a later part of a horror map without completing the earlier parts. Some fans complained about this, and the crew relented and redid the maps. This makes for an interesting continuity error; the end of FINALE, which involves the PIE team escaping by blowing up a boiler with an explosive device and a room full of combustible materials, is almost identical to the start of another episode, set in the same horror map, filmed as part of the previous story arc involving escaping the Toilet Toucher's house with two life-size action figures of Batman and the Flash, and the subsequent arc dealing with the fake Johnny Toast, which was resolved immediately before the first episode and was referenced at the beginning.

It is possible that she is the 'her' sometimes mentioned by Johnny Ghost as a lost love; at one point when he considered leaving his entire life behind after believing he was about to turn into a watermelon, he considered calling her and wondered she would remember him. He then decided instead to kill everyone on the map.