Jeremy Acachalla ​​​was Papa Acachalla and Papa Nadachalla's Brother and the cousin of Maxwell Acachalla, he also was Gramama Acachalla and Grandpa Susan Acachalla's son. He was said to be insane, probably murderously so. At some unknown time before the episode took place, he transformed into to a monstrous shadow-like creature with a poisonous touch.

Not much is known about his origins, aside from the fact that he is Papa Acachalla's brother. He was not present in the video showing Acachalla's childhood, suggesting he was either born later or had already left the house at some point prior. On October 1st 2013, he is found in a cage in the Acachalla basement by Papa Acachalla's adopted children, Sally and Billy. He then runs at them after escaping his cage and attempts to kill them. They run and call in Papa Acachalla, who shoots Jeremy. This somehow causes Jeremy to be thrown into a different room and to split into two identical copies. The siblings respond by sending in a Minichalla, a miniature clone of Acachalla, to go in and kill him.

Jeremy Acachalla may have been one of the ghosts released into the Black Diamond Facility by Katrina in September 2014 to attract the attention of Johnny Ghost and Johnny Toast. Whilst crawling through a tunnel, Ghost saw a shadowy figure and heard a familiar sounding shriek and asked Toast if he thought it was Jeremy Acachalla. Toast, however, did not see the figure because he was stuck behind Ghost and could only see Ghost's hindquarters.

At some point between October 2013 and January 2014, Papa Acachalla first discovered Jeremy in his basement, apparently not recognising him. He later realised after discovering that Maxwell Acachalla had returned as a ghost. He was later seen releasing Jeremy's soul by killing him with an axe. 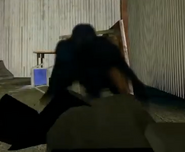 Possible sighting by Johnny Ghost in the Black Diamond Facility 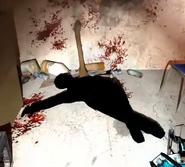 Jeremy seems to not fully exist within the 1st dimension, as he phases in and out of reality. This makes him more difficult to hit. Jeremy has the strength to break through a chain linked wall, leap long distances, grow in size, and swipe at his victims with a force comparable to Freddie. Strangely enough, Jeremy can duplicate himself when shot/killed, but has only showed this ability once.