Jack Links is the adoptive father of Mary and the husband of Susie Gumball. According to Susie, Jack is actually a mermaid, the genderbender of Ariel (from the movie "The Little Mermaid", 1989). He is the equivalent of Papa Acachalla in the 13th Dimension. Because of this, like every other character from the 13th Dimension who has an equivalent in Earth, his features are almost totally different from those of Papa Acachalla. In his case, almost everything that Papa Acachalla does, he does similarly. For example, he is the adoptive father of two children, Mary (equivalent of Billy) and his "Owner" (who Mary thought was his sister), which doesn't have a real name, but may be equivalent of Sally. His acts are similar to Papa's, but not much is known about him, because there is still only a few video about him, but is known that he acts very similar to Papa Acachalla. According to him, he knows who his equivalent is on Earth, and doesn't like him much. He thinks that all of the Acachalla Family is weird.

Not much is known, but he seems to be really similar to Papa Acachalla , but unlike Papa, Jack doesn't love his children as much as him, and doesn't use only the physical violence to harm people (usually using big and powerful guns, such as machine guns) but can hurt the feelings of others, saying mean things to them, as he does with his son. Jack is also very narcissistic, because several times he says that he is extremely beautiful.

Somewhat similar to Papa Acachalla, is Jack's affinity for meat. Having a dream to escape to the first dimension to sell chunks of small meat in bags, being a joke on his name, Jack Links.

Jack seems to be somewhat selfish, as he was shown to, in a sense, force his mother to make him cookies when she did not do so immediately. He also wished to combine with Papa Acachalla to gain ultimate power over all dimensions. He eventually evolved into the physical form of Jose Jose Jose Jose.

Jack looks exactly the same as his wife, Susie Gumball, but wears blue clothes, instead of his wife's yellow. He has white skin, blue eyes, and is sort of fat (not as much as Papa Acachalla). Because of his cap, you can not see much his hair, but due to he having a blond mustache, beard, and eyebrows, it can be assumed that he is blonde (or bald, like Papa Acachalla). His eyebrows are really big and messy, as is his mustache, but his beard is thin. He wears a blue jacket (with "SECURITY" in yellow on the back) with a zipper, brown/grey pants, and brown shoes.

When jack became Jose Jose Jose Jose, it is unknown if this transformation was just mental, or if he also took on the form of the gorgeous Fiend.

Mary is the son of Jack. Jack seems to try to like Mary, but always fails to. Jack acts heartless, even unintentionally, always raising the fact that he is just a puppet, even saying that "he doesn't deserve a birthday party, he deserves a 'build'-day party". Although, Mary still tries to love Jack.

The Gnome is Jack's father. Jack is scared of him, and because of everyone calling him Grampa (or Grandpa), Jack gets scared only by thinking that the Gnome can be his grandfather, and always gets shocked when Grampa turns into another object/animal. But, they still coexist with each other, and can speak normally.

Along with almost every other Links/Gumball, Jack doesn't like the Acachalla Family. To him, the Acachalla Family is composed of a bunch of weirdos, which looks strange (to the 13th Dimension people) and do strange things, like adopting humans and doing normal things that everyone does.

The real puppeteer behind Mary also acts a bit as a character, Jack tries not to talk to her, but, when he does, he asks her who she is, when she came, what is she doing, and why she's holding his son.

Jack is actually Jose Jose Jose Jose in disguise. The Acachallas transported him to the 13th dimension for unknown reasons. It is also unknown how Jack/Jose keeps getting back to the 1st dimension to appear in other videos.

Strangely, Jack and Sally seem to be friends. In "BEST MOD EVER! - GMod Funny Furby Mod (Garry's Mod)" its shown that, after eating after midnight, Sally turned into a old man, and traveled to the 13th dimension to play with Jack in his family park. 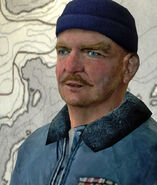 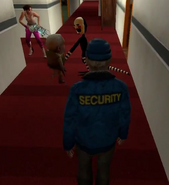