Grandpa Sink Supplies, also known as the Gnome of the 13th Dimension, is a creature that appeared in the Acachalla Family Household on Thanksgiving day that went on to become the Acachalla family's adoptive grandfather.

Life before the Acachallas & powers[]

It is not known in detail how he came there, but it is assumed he came through the portal that opened in Papa Acachalla's house. He was identified as the "Gnome of the 13th dimension" by Johnny Ghost, however, it is not known if he has had an encounter with this creature before. He is presumably from the 13th dimension, explaining his name. His age, gender, height, weight and so on are unknown, but his appearance suggest he is an old, short, overweight (or at least from the looks of it) Gnome-type man. He also has a metal peg leg, it is unknown, though, why he needs it. He may have cut off his leg for some reason or something else.

He is the father of Jack Links, grandfather of Mary (Marionette) and his sister, which doesn't have an official name but is called "The Sister", or just "The Woman That Controls Mary" (probably an "Anti-Sally", because Sally may be the equivalent of her (in the normal Acachalla Family), The Maybe Husband of Grandma Links and Father-In-Law of Susie Gumball. He is also somehow related to an unnamed gas station manager.

Because of his powers, he was given the ability of turning into almost every object in the world in the 5th Dimension, most commonly a lamp or a crate, and also, into watermelons and chickens.

He later traveled to the 4th Dimension, where he learned that if he broke a cup, he would grow taller. He tried this, and became much taller than he already is. However, he returned to short size after claiming being short was better.

The gnome still on occasion takes residence at the Acachallas, while doing this he seems to find great joy in terrorizing Papa Acachalla, but respects Gertrude enough to settle down.

He later showed up at Billy's pool party where he ended up dying from eating rat poison that he thought was ice cream.

He later showed up his unnamed grandson's gas station where he started acting like a ballerina before dying of a sprained liver.

He later showed up on Chakalata Soup's boat during a P.I.E. investigation pretending to be Chakalata Soup so he could join Johnny Cranky's group Destroyers of Investigators Extraordinaire but ended up betraying and killing Cranky, killing Spooker, and then killing the real Chakalata Soup.

Sink Supplies has a major part in the ending of the Billion Year War - he saved Queen Sally after she was deposed by her people by taking her to a time before the war, where he assisted Johnny Toast in preventing Papa Acachalla from starting the war in the first place. 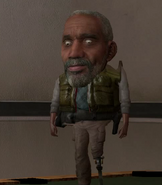