The Ghostmobile is Johnny Toast's Car which he regularly used in PIE investigations and was dubbed "the Ghostmobile" by Johnny Ghost. Earlier videos had shown the PIE team operating in a white van, and in one particular instance the pair had ridden to a call on a tandem (a two-seater bicycle).

It appeared in the HAUNTED BY CARDBOARD FRIEND! and THANKSGIVING SPECIAL 2014 videos. In its first appearance, it was a Venturian-Blue Dodge Charger. When it appeared next in the 2014 Thanksgiving Special, it was a much smaller sports car with a lighter blue paint job at the front with a slow gradient into black at the back (Ghost claimed that it had originally been completely black) and a very light blue vinyl cover. The car was last seen driving into "the Dimension of Darkness" - In following episodes involving vehicles, they took the van.

One of the few Ghostmobiles owned by Ghost was a bright red Dodge Charger - when questioned about his choice of colour, he simply stated, "I like the colour red, I don't know why."

The next incarnation of the Ghostmobile was a black car that Toast bought for $99, much to Ghost's distain. It was last seen being sucked into another dimension. 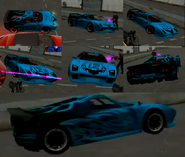