Five Nights At VenturianTale is a single-player horror game based on Five Nights At Freddy's. This is simply a fan game, credit to Scott Cawthon for the original idea. This game is for our YouTube channel, Venturiantale. https://www.youtube.com/user/VenturianTale

"Five Nights At VenturianTale is a single-player horror game based on Five Nights At Freddy's. This is simply a fan game, credit to Scott Cawthon for the original idea."
―Official Description

Five Nights At VenturianTale is a survival horror game with point-and-click elements, much like Five Nights at Freddy's and its fan games. The player must survive the night at VenturianTale's house from 12 A.M. to 6 A.M. without being attacked by the characters that roam around the house. The four characters are VenturianTale themselves: Jordan, Isaac, Bethany, and Cierra. During night 8, they are replaced by Papa Acachalla, Spencer, Jimmy Casket, and Sally Acachalla, respectively.

The player resides in a bedroom that belongs to one of the Frye siblings, at a desk with a laptop. They are provided with a network of cameras, which are placed in various places around the house. Each character roams around the house and have unique movement patterns, which mostly take place off camera. Most of camera screens appear black and white, which make it harder to find the enemies. Like the other FNaF games, the player cannot leave the office; however, they can turn on the laptop in order to prevent characters from attacking. In addition, one of the cameras contains a music-box type hud that must be remotely wound up through the camera interface in order to prevent Bethany from leaving her room. Failure to check on the characters or prevent their attack will result in a jumpscare, forcing the player to restart from the beginning of the night.

The game consists of eight levels referred to as "nights", increasing in difficulty. Unlike the FNaF games, players have access to all nights at the startup, meaning that any night can be played from the start.

Five Nights At VenturianTale was conceived as a simple but scary FNaF fan game. It was created using Clickteam Fusion 2.5. Prior to its release, a demo video was published on Isaac's YouTube channel. Two more demo videos were made upon the release of version 1.4.2, which marked the debut of Night 8.

The game was released onto Isaac's Game Jolt account on February 14, 2015. It was updated multiple times, with the biggest change being the addition of the eighth night on February 16. It was made available online on February 17, allowing players to play the game without having to download it; downloading the game is still an option. As of April 6, 2015, the current version of the game, 1.4.4, saw the addition of a phone guy, who helps to guide the player from Night 1 to Night 5.

To promote the game, it was played twice on the VenturianTale YouTube channel, once by Jordan and once by Bethany.

Initial reactions to the game were rather mixed. Although many have praised the game for its similar mechanics to the original FNaF, it was often criticized due to its unexplained difficulty, in which some nights are much harder than others and vice versa. Isaac responded to these issues through multiple updates, which now allow for a gradual increase in difficulty.

Five Nights At VenturianTale has become Isaac Frye's most popular game, and its popularity continues to rise today. Its popularity has led to fans developing a series of fanfictions and theories, due to the game's lack of a storyline. To date, multiple people have played the game and posted many of their gameplay videos onto YouTube, most of which were received positively by the VenturianTale crew.

Due to its popularity, many have asked Isaac to develop a sequel to the game. It would not be until February 17, 2017, however, that Five Nights At VenturianTale 2 would be released, making it Isaac's first game in two years. 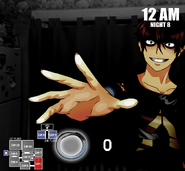 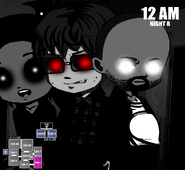 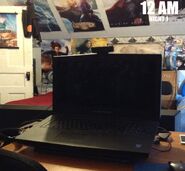 The player's office during Night 1

NIGHT 8 COMPLETE! - Five Nights At VenturianTale Gameplay
Gameplay of Night 8. This video was uploaded on Isaac's channel upon the release of Version 1.4.

ACACHALLA FAMILY NIGHT 8! - Five Nights At VenturianTale Update
A demo of Night 8 from the game. This video can be found on Isaac's channel and was created prior to the 1.4 update.

FIVE NIGHTS AT VENTURIANTALE Horror Gameplay - HomelessGoomba
Gameplay of Five Nights at VenturianTale. This video can be found on Isaac's channel and was uploaded on February 14, 2015, the same day the game was added to gamejolt.com. 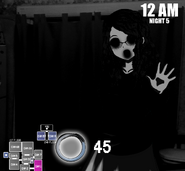 Bethany on CAM 1 during Night 5. This is the camera where players have to wind up the hud to prevent Bethany's escape. 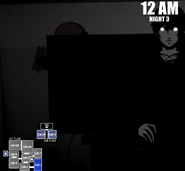 Jordan on CAM 6B during Night 3, the first night when he appears. 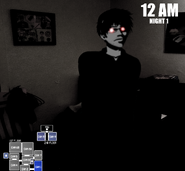 Isaac on CAM 7 during Night 1. 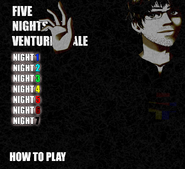 The game's startup screen featuring Isaac on the right.

I hope the game works well for everyone! The new download of the game I added should change the resolution for you if you do not have 1920x1080! Let me know how things are working, and please let me know about any bugs! :)

Version 1.1 of the game is up for download. I adjusted the difficulty of nights 3 through 7 to make the game switch from easy to hard not so suddenly. Enjoy! :)

Version 1.2 of Five Nights At VenturianTale is up!

Added new sound when you catch someone in your room.

Added new sound when Jordan fails to catch you and resets his path.

Changed Jordan’s difficulty on nights 5 through 7. You must now watch him more often.

Now you can click on the computer to turn off the screen more quickly after pressing the Red Button.

Now when someone is in your room the room becomes dark, making it look more scary.

Version 1.3 is now available! I recommend that you re-download the game. :)

night 2-7 had lots of difficulty issues, and I changed some things to make it play more smoothly! The transition from easy to hard should be much more smooth now, and not so sudden.

Removed a bug allowing for players’ deaths in cases they should have lived.

Removes bug that caused ImmortalKyodai to kill you much to fast, and sometimes give you a 0% chance of survival.

This is the hardest night in the game!

Fixes multiple bugs that may cause you to die when you shouldn’t.

Re-download the game to get the newest version, you’ll be more likely to survive! :D

There is now NO download required! Play the game right from the page. :) Bookmark the game and come back to play anytime! It will always be up-to-date with the newest version. :)
Community content is available under CC-BY-SA unless otherwise noted.
Advertisement