VenturianTale Wiki
Register
Don't have an account?
Sign In
Advertisement
in: Fallout Robot, A Minecraft Tale, A Skyrim Tale,
and 18 more

Daxius is the name given to several large creatures allied to Venturian. The name was first given to an Iron Golem that Jordan and Cierra built to protect Ventopia, then later to a Dwarven Centurian in Skyrim built by Poet, and again as Liberty Prime in the Capital Wastelands of Washington, D.C. He was later killed by the Enclave. Daxius returned once more in the Oblivion Tale Shivering Isles DLC as The Gatekeeper and then later as Jordan's Pokémon but died again in the Howling Halls from a Golden Saint Guard. He is set to appear in Another Skyrim Tale.

In A Minecraft Tale, Venturian built Daxius to protect Ventopia from Tree Pigs, and all monsters who plan on entering. They brought Daxius with them on their way to the stronghold to kill the monsters who attack the portal. Then they all died, respawned, returned and Jordan immediatly saw that Daxius entered the portal himself. He eventually died in The End. When Jordan, Isaac, Bethany, and Cierra returned to Ventopia they put him back in his position. He made multiple cameos in other Minecraft videos after the Main Series, as well.

Like Lil' Vent, Daxius has traveled into the land of Skyrim in a different form. He was made of Iron before and he returned gold, he has basically become a Dwarven Automaton built by Poet. He is built with more abilities and powers. Before the Battle in Whiterun, Poet was smart and made Daxius II for the battle.

Daxius appears as a tank in the Minecraft mod and attacks the gang. After his defeat at the hands of the crew, he was accused of treason, But soon forgiven due to that they did not look like his friends.

Daxius traveled to Washington, D.C. in a form similar to his form in A Minecraft Tale. He was introduced in the 27th episode. In the Fallout Tale, Daxius is an enormous steel robot in the Brotherhood of Steel fortress and has been dubbed Liberty Prime. He has for some reason developed an extreme hatred of communism. Though he may have been altered by the U.S. military, RobCo Industries and General Atomics International to defeat China during the Sino-American War. It is unknown how Daxius was captured. He talks now though it is mostly anti communist propaganda and pro democratic rally's. Since this is the first time he's ever talked, he could have always have been anti-communist or he could have been programmed to be his way by the U.S Military. Daxius thinks that the Enclave are Chinese communists. Reginald Rothchild said the brotherhood will be using Daxius against the Enclave satellite relay station. Daxius sadly met his end at the hands of the Enclave when their Mobile Base Crawler called in a orbital strike on him. Cywren and Venturian were horrified by his death. Rothchild also was depressed when he learned of Daxius' destuction as this meant that all his hard work went down the drain and the Brotherhood lost it's one advantage over the Enclave. Cywren and Rothchild vowed to rebuild him, better than before. He had lived a long way through the series, making it to episode 56. He is being rebuilt but it should take a few years.

Daxius was created by Relmyna Verenim and guarded the Gates Of Madness. Jordan had to kill Daxius but later Jordan came back, revived him, and caught Daxius in a pokéball. Daxius went on many adventures demolishing anything that came in his way. Unfortunately Daxius was killed in the Howling Halls by a summoned Golden Saint Guard. He came back in episode 117 helping Asylum fight spectral warriors.

A dwarven centurian similar in appearance to the AST-era Daxius is set to appear, based on the series' trailer. He appears to be battling Asylum Weaver.

In Minecraft, he wasn't given any powers, he was just made of Iron and was very strong. He also didn't take fall damage and could stay underwater for as long as he wanted without drowning, But when Poet rebuilt him into a Centurian, he was given many more powers such as Steam Breath, Plate Armor, Blades, Hammers for Hands, extreme strength and even the ability to speak. Daxius also had many forms in A Minecraft Tale. In Fallout 3 he is an enormous steel robot containing medium sized nukes as well as laser sight (made out of ammonite). He also became near-invincible even to nukes. He does have one weakness, orbital strikes. In An Oblivion Tale, Daxius has A giant sword hand and is able to knock out followers in one hit.

"Anchorage will be liberated." "Communism is the very definition of failure!"

"Liberty Prime is online. All systems nominal. Weapons hot. Mission: the destruction of any and all Chinese communists!"

"Embrace democracy or be eradicated!"

"Death is a preferable alternative to communism." 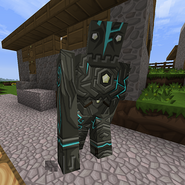 Daxius in Skyrim
Community content is available under CC-BY-SA unless otherwise noted.
Advertisement