Batman appeared in the One million subscriber livestream, owning a Hotel. But, he was killed by Spencer's sister, Vanellope. After much fighting and bloodshed of trying to win back the hotel, Batman kills Vanellope and keeps her in a basement, acting like he went insane.

Batman appeared in the Joker babysits mod, appearing to have three children that look like Mario,Luigi,and Peach in baby forms. He let the Joker babysit them, soon after coming back for Pizza.

Batman and His Bat Family hit the town and kept running into The Joker.

Batman gathers Robin, Batgirl and Nightwing in the dining room to find out who broke into the Bat-vault and stole his Bat-Twinkies. However this Batman turned out to be both The Joker and Spencer in disguise and was killed by Robin.

Batman and Superman try to kill eachother with several different weapons while saying random quotes from their respective movies.

Batman later showed up at Foxy's Taco Bell where the gave him a bat sea to sit in (an upside down chair attached to the ceiling.) They later killed him for no reason.

Batman shows up at Johnny Toast's house and is immediatley killed by a giant living bottle of Gamefuel Mountain Dew.

Batman is very arrogant and enthaustic about his job, often thinking he will complete tasks for the sole reason that "hes Batman". While he sometimes acts immature and idiotic, he often makes intelligent notes during his detective work.

Batman is trained in martial arts, and can knock out a gang of thugs in seconds. He can easily break the bones of the average thug, and silently blood chokes thugs in Predator maps.

Batman in one of his many costumes

The safe word is police brutality!

Chinese soldier about to stealth attack two American soldiers on the battlefield, circa 2077 (colorized) 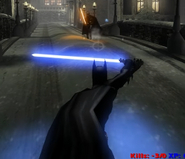 Batman in a duel with himself 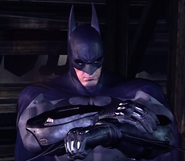 Batman checking if his muscles are still there