"Brandi Says Hi" is a 2D Side-Scrolling Horror/Strategy video game! The goal is to collect 10 orbs spread throughout the map. The tricky part is that you're being chased by a big scary robot the entire time! The levels gradually become harder, and there is even a second enemy in later levels! This game was created using Clickteam Fusion 2.5

"Brandi Says Hi is an Action Horror Game! This game includes 10 fun and difficult levels for you to try and complete!"
―Official Game Jolt Description

Brandi Says Hi is an action horror game created by Isaac Frye, with assistance from Jordan Frye and Bethany Frye. An original game, it was developed originally for the now-defunct Steam Greenlight. It was published onto Steam on February 7, 2015, and onto Game Jolt on February 20, 2015.

The gameplay is similar to that of a free-roaming game, while also containing point-and-click elements. Players control black doll-like figure to collect ten blue orbs without being attacked by the two characters in the game. The game's two characters are Brandi, a purple damaged robot with red graffiti on his head and body, and Aiko, a doll with a red dress, black hair, and blank eyes.

The game takes place in an area that is either mostly pitch black or fully lit, depending on the version being used. Players must collect the ten orbs while running away from the characters, without letting their power run out. They are provided with a flashlight that partially lights up the room to reveal the location of the orbs; however, constant usage of the flashlight, along with any form of movement, contributes to the amount of power consumed compared to standing still. Their location is provided by a map on the bottom right corner, with blue designating the player and orange designating the enemies. If the players fail to collect all the orbs by the time the power runs out, or if any of the two characters catch the player, they will be jumpscared and brought back to the main menu.

Isaac Frye originally developed the game for a Steam Greenlight competition. Jordan created the game's music, while Bethany worked with Isaac to create the graphics. As with the rest of his games, it was created with Clickteam Fusion 2.5. Prior to its release, Isaac teased the game with a full portrait of Brandi on January 15, 2015, and a portrait of both Brandi and Aiko on January 17, 2015.

On February 7, 2015, Isaac published the game onto Steam Greenlight, while also releasing a demo video on his YouTube channel. The Greenlight page was last updated on April 13, 2015. While the game was approved by the community, Isaac never took the chance to move the game onto Steam, and it will most likely never be released onto the website due to the retirement of Greenlight. However, Isaac uploaded the game onto his Game Jolt chanel on February 20, 2015, where it is still playable today.

In addition to the demo video, Isaac also provided a gameplay video for the VenturianTale channel on November 13, 2015.

Brandi Says Hi received generally positive reviews. Many have praised the game for its uniqueness, though others are critical of glitches and the game being zoomed in on the downloaded version. As of November 2019, the game has 20.5k views, 112 likes and 116 followers.

BRANDI SAYS HI Gameplay - HomelessGoomba
A demo video of the game that appears on Isaac's channel. 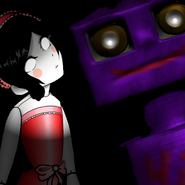 Let me know how it works. :) The game runs well if you download it.

You can just play it on the website’s page, but it’s a little more buggy. ^_^
Community content is available under CC-BY-SA unless otherwise noted.
Advertisement