Baymax is a balloon robot that works at Papa Acachalla's 7-11, and tried to sell a Wash Tub to Papa Acachalla, only for him to be killed by Sally Acachalla when she put balloons on his car, causing him to fly upwards and then fall o his death.

Soon enough Officer Maloney investigated the 7-11. He would have arrested Baymax had it not been the sudden appearance of his mother and family from space, which creeped Maloney out so much that he arrested himself to escape. 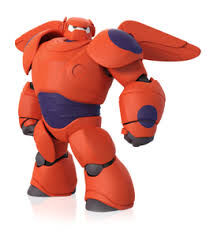