Human Redguard (unconfirmed Time Lord, as he can control a TARDIS, though with difficulty, and has regenerated multiple times)

Venturian
Asylum Kyte Weaver is the main protagonist of An Oblivion Tale, An Elder Scrolls Online Tale, and Another Skyrim Tale.

When Asylum Weaver first started hearing the voice of Jordan Frye in his head, he was locked up in the dungeon, evidently awaiting his death. He managed to escape with a bit of luck and some help from the Emperor. Since then, he has been roaming the streets and hills of Tamriel, and even crossing rifts to other realms, in search of adventure.

Asylum seems to have a knack for getting himself into trouble, and has ended up in prison countless times. He is a thief, an expert lockpick, a killer, and in his younger years he was a pirate, though he never had a ship of his own. His reputation once caught the eye of the Dark Brotherhood, but Asylum never joined them.

Asylum is a skilled fighter, incredibly strong despite his small stature. His primary weapon of choice is a sword (particularly a glowy sword if he can find it). At a very young age, he became champion of the Imperial City Arena, never batting an eye as he cut down his opponents one by one. In his later years, he took up using a bow and arrows, and began learning to fight as a mage as well. He particularly favors lightning and fire based magical attacks.

Asylum is a rather quiet person, typically only speaking up if he has a question or snarky remark to make. He seems rather comfortable for the most part letting Jordan take the lead for most of their adventures, and finds great amusement in watching Jordan fail at simple tasks, especially when he knows he capable of them himself. He has a bit of a dark streak, and often seems to be unnaturally calm and unphased, but though he tries to act emo, he does ultimately have a good heart, and is unendingly loyal to his friends.

Asylum was a vampire for a short time. Jordan was completely shocked when Asylum bit his first victim, and took a long time to fully process the new information. Asylum seemed to enjoy his new life for a time, fully embracing the life of a vampire. But after a while, it began to tire him - he missed the sun, he had horrible nightmares, people would refuse to speak to him, and he never managed to get enough blood to stay healthy. He eventually found someone to make him a cure, and he happily took it, free to walk in the sun once again.

Sari was Asylum's first follower. She simply started following him one day without warning or explanation, irritating Asylum greatly. For a while, he tried to get rid of her, but after a while he realized that she was incredibly strong, and would be useful to have around. Sari and Asylum eventually grew to be very close.

Mimi was Asylum's first friend in Tamriel. They met at an inn, and Asylum opened up to her about his life story. When Asylum returned to the Inn much later, Mimi recognized him, and decided to start following him. Jordan was rather perplexed by this, but Asylum and Mimi got along well from the start, and grew to be very close.

Lena is Mimi's twin sister. Asylum and his friends visited an inn Lena was staying in, and when she saw her sister Mimi, she decided to follow along. She had a bit of a violent streak that only seemed to get worse as time went on. Asylum eventually had to start leaving her behind on his adventures as she started trying to murder his other companions, particularly Sari.

Jerry caught Asylum's eye one day, and whether it was out of genuine interest or just out of pity, he decided to befriend him. Jerry was a bit of an odd duck, loyally following Asylum around but never assisting in combat, always talking about his obsession with bones, standing uncomfortably close to Asylum whenever he stopped. He was rather creepy at times, but Asylum seemed to care for him anyway.

Underneath a bridge in the middle of a river, Asylum found the drowned body of a drunken troll who had killed himself out of loneliness. Asylum was deeply upset by this, and with Jordan's help, figured out a way to resurrect him. Asylum named him Kajsa, and loves him very much.

While not technically a follower, Sigrid was Asylum's ally/rival during his ESO adventure. She is Jessica Ott/Javott42's ESO character.

Asylum Weaver was created for the Let's Play series titled An Oblivion Tale. His gender was first revealed in the 2016 episode of A Mini Minecraft Tale titled I BROKE IT!! - Mini Minecraft Tale Ep. 31, as was the fact that his theme song is being written. In *IMPORTANT* An Oblivion Tale Update, Jordan Frye announced Weaver's name and revealed his theme song, as well as official images of the character. 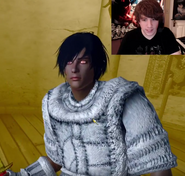 Asylum as a vampire

one of his many emo hairstyles 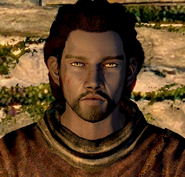 Asylum as he appears in Another Skyrim Tale 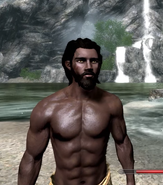 Asylum is ripped in Another Skyrim Tale
Community content is available under CC-BY-SA unless otherwise noted.
Advertisement