Amiee, (variously rendered as Aimée, Amii, and Aime) is a French ghost girl played by Bethany Frye that was investigated by Johnny Ghost and Johnny Toast. She once worked with Johnny Toast against Maxwell Acachalla and Johnny Ghost by some sort of twist of fate. She cannot speak complete or fluent English. After her many years of life, she thought the current time was 1715, most likely around the year she passed and became a ghost.

Amiee was present during the naming of P.I.E, when Johnny Toast saw the that they could make the word pie into an acronym for their popular phrase "Paranormal Investigators Extraordinaire". Amiee however thought the name was stupid, as they used the mathematical Pi symbol as an excuse to name themselves that, despite the fact it's spelled differently.

Aimée is usually very positive. She always acts sweet and kind, even if she sometimes acts in a disturbing manner. She is often oblivious to important things, like the fact that she is dead. She also tends to be very open with her wording, saying what comes to mind without second thought. However, there are also times when she can be extremely prissy and dangerous, causing people to run away.

Before having a crush on Johnny Ghost, Aimée was convinced that Johnny Toast liked her. He has since then had nightmares of her.

After a misunderstanding involving the word "relationship," Aimée was convinced that Johnny Ghost liked her. She was very quick to fall in love with Ghost, despite Ghost not wanting any part of this. He, like Toast, also has nightmares of Aimee to this day.And what video is this from!

She works with him to rob a bank/hospital (for more details on the robbery, go to Zviggles's page). She is very fond of him and/or his name, remarking when he tells her his name, "Aw, I love Zviggles. Oh, you're so cute," and then, some words that resemble "your name Zviggles" or something. The feelings don't seem to be mutual, though, as he responds, "Oh, you're like a chew toy, you just keep squeaking."

Aimée briefly met the Sensei during an episode of "Put the Cash Money in the bag". Aimée asked for him to teach her something. "Sure thing." He replied, before hitting her over the head with a crowbar and saying, "You are a terrible guard. Stop being an idiot."

Aimée and Gavin once robbed a bank together. Due to his resemblance to his brother, Aimée undoubtedly liked him.This is confirmed when she fights over him with Josh while he robs another bank

Aimée and Josh were apparently best friends until they fought over Gavin.

In the 5th anniversary livestream it was revealed by Jordan that Aimèe was Maddie Friend's mother.

Aimee thinking Johnny's from the Avengers 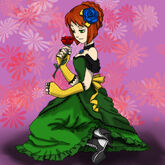 Fan art of Aimée by SylarGrimm