What's on your mind?

I am not underage. I am 13 years old. I currently have been working on something. I remember VenturianTale and I knew full well that I missed that channel a lot. Greetings, fellow adventurers. You may say hello if the wiki comes BACK FROM THE DEAD! I am currently making a song on JummBox, a chiptune music maker made as a modification to BeepBox, (which has a similar purpose) based on the Back From The Dead song.

Thank you for listening 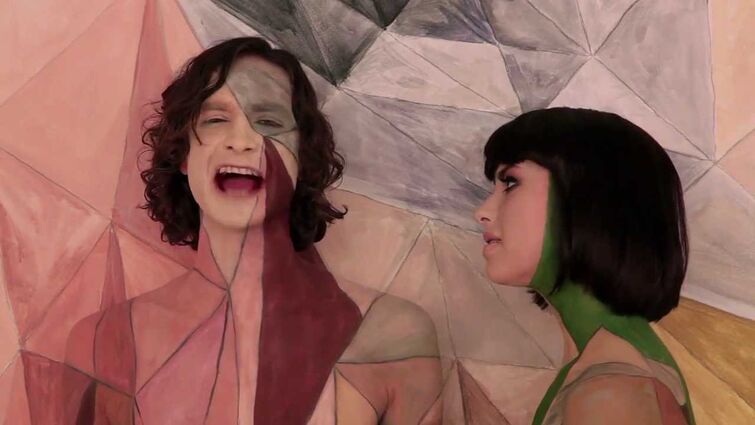 Gotye - Somebody That I Used To Know (feat. Kimbra) [Official Music Video]YouTube

First question: who is even on this anymore? Do ppl still care about Venturiantale? I doubt it…but im begging that someone prove me wrong.

Second question: If there is anyone still here, what do you think is going on w/ Venturiantale? When do you think he’ll return? What if he doesn’t? I remember that video he posted talking abt this whole situation (it’s deleted now) he said,”I HOPE to see you all again ONE day” what if he doesn’t “see us again” one day? Originally I thought the “one day” was just gonna be a month, but if he ever comes back, what if it’ll be like 2 years from now?! One more thing… I know in a past video (roughly three years ago) he mentioned frequently checking the Wiki, and I doubt that’s even the last thing on his mind, but IF for SOME reason, he does check, this message is for Jordan: we love you, we love you’re family, and we respect you. So take all the time you need, but PLEASE don’t don’t leave us behind and more importantly, I want you an Isaac to work harder than ever to try and help fix your family!! You’re the first YouTubers I’ve ever watched and to this day, you’re still my favorite!! Watching tear each other apart, for so long you were the best family in America, DO NOT give that up now! Now I’m gonna stop before I keep going and accidentally write a paper about this. But pls, we ALL miss you Jordan.

Ok everyone I’ve been trying to be as lazy as possible today(Supernatural won’t watch itself, you know) but tomorrow I have a theory(plz tell me if someone else has made this theory before)about how the melon friends could be ancient beings from the 13th dimension

Ok people I’m officially ready to join after some

Punctuation and I talk as lazy as I can but if you ever want me to use punctuation in a conversation just ask :) I have been a fan of Venturiantale from the beginning despite how young I was back then and he never disappointed once even after all of those years which only further solidifies my love of the channel and gives me another reason to join the wiki

People, I’ve been thinking about joining this wiki for a while now, but didn’t know if it would be weird to suddenly join out of nowhere, especially considering that Venturiantale isn’t doing well and we might not see another video for a long time… But I have been a fan of Venturiantale since the first year which is saying something because I’m only 13.(less than two weeks I’ll be 14 but still)I have been watching his videos and enjoying them since I was four, and, as all of these bad things happen to Venturiantale it gets harder for me to watch his old videos knowing the horrible events that have occurred. All of his old videos are getting genuinely painful to watch knowing the truth about his family and what has happened between him and his siblings… I know this is a fandom site not associated with his channel in any way but has anyone here ever talked to him in any way? Do they know how to contact him in a way that isn’t shut down? This is a big deal to me because I want to support the YouTuber that has meant so much to me for 8 years and possibly let him know how to fix the tension between him and his family.(I know it may not sound easy, but as a long time viewer and someone who knows a lot of things about emotions and families, I think I can help.)at the very least even if I can’t help I’d like to have the comments restored as they can at least bring some life back to the now barren videos. I’ve also seen a fandom account that had his logo and the name Venturiantale… i know Venturian isn’t associated with this wiki but is that really Venturian? I’m asking because this is a big deal to me… I don’t have the words to really describe it. I’m sorry for making this long! I just really don’t know what to do anymore. If anyone can help with this problem I would be eternally thankful.(btw I would still love to join but for know I’m just sticking with saying something that is a much bigger deal to me) 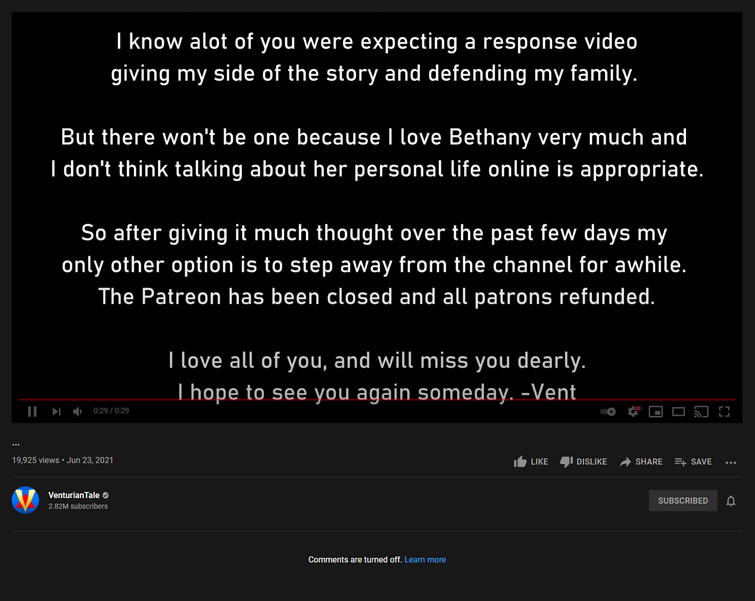 Description: A "Venturential Crisis" is a state of nostalgia but also a deplorable sense of sadness.

Cause: The memories of the old times of the Youtube Channel "Venturiantale", whether the person is missing the characters that they loved, the childhood innocence that it brings them back to, or the bustling community of the "fellow adventurers,".

Patient Zero: The first patient of this condition is unknown but has been theorized to have appeared sometime between early 2016 and mid-2018.

Making references to the old characters in everyday life.

Common Traits of Patients Affected: The patients affected typically are between the ages of 15 to 17. They likely grew up watching Venturiantale. Some patients have said that they saw the community and group as the family they never had. In more extreme cases the patient was a victim of bullying in their youth and would watch the videos after school as an escape.

Additional Notes: The patients are often considered entitled because they wanted the channel and their world to remain the same as it always did. However, it is important to remember that these patients are likely on the verge of adulthood and miss the times where they felt the childlike connection to these YouTubers.

Courtesy of the University of Little Butts North Carolina.

VenturianTale
I Like It
I Miss The Old Style

Could y'all wiki creators maybe choose a shade of blue that's less...eye-bleeding? I know it's supposed to match the background but I'm already legally blind lol

Hi, this is my forum on here so if I get anything wrong, please tell me. Anyway, I have been watching old videos of VenturianTale that feature Mario in order to fill out the wiki page on him. However I have come to a problem. What about the speed run of the game that Issac did on the channel? Issac has already played Mario 64 in a let's play before. Do I just ignore it? Is it soft cannon? Is there some weird and complex reason for this? I am looking into this too much? The answer to the last one is yes.

I doubt that there is actually an explanation for this, but I just wanted to come to the community to see what you guys think. I know that this is a very ridiculous thing to post about, you don't need to tell me. Thanks.

Hello everyone! Fallen here! I'm here to announce that we are planning on hosting a summit to discuss certain topics or changes that need to be made here on the VT wiki!

The way this would work is that everyone able to participate will join a voice call on the FA discord server in a private wiki admin only voice room to talk about topics associated with wiki management. (a voice text chat will be available for those who will not be able to talk in the voice call.)

Alie and I are currently compiling an "agenda" with different sections and ideas for these topics, if you have an idea or something on your mind that you feel we should discuss, please message either me or Alie on discord and we will add it if we have not already!

We currently need all active admins to respond either to this announcement or to the post I made in #Wiki-Admins on the discord server on what days of the week work for you, and what your timezone is so we can find a good middle ground so we can hopefully have everyone join us!

If you have any further questions please message Alie or me on discord:

A couple of minutes ago, I helped a fandom user find an old site. I then went to Isaacs page to disband the link to obfuscate any further confusion... only to be told I need to have administrative privileges to edit this page... while I'm an admin. I know I could just change the permissions while I change the one line- and it is letting me do that if I so choose, so no bug there- but not only is that preposterous and a wonky workaround regardless, I'm also too lazy to do that every time I need to fix things.

Does anyone know how to fix this? Er, if it isn't locked behind something higher on the totem pole and just doesn't tell me, I mean.

Hi, I saw the link to Isaac's QuestWriter website on his page and I went to click on it, but when I did all I got was a message saying the website wasn't available. Has it been taken down? Has it been moved? What's happened?

The day we all regretted has come. At this time, I believe everything has moved, except for the inappropriate stuff, and thus I have submitted my request to close the VenturianTale Fandom once and for all. This is a big upset for all of us, but it is now time that we move on and deal with what we have, and now allow others to enjoy fanfics on this Wiki, where it has been stated that it would get more attention.

In the meantime, wether we want to create a new Fanfic Wiki or not is the question, so please give me your thoughts.

It's been noted by a great many people over the last few years that the article categories for this wiki are in dire need of improvement. In many cases there are several different categories that all relate to the same thing, each featuring different pages that logically should all be shared on the same page, as well as categories that don't necessarily relate to the page, or even categories that are pure speculation or personal opinion on the part of the editors, such as someone adding "Awesome" to a load of different character articles.

My proposal for tackling this is a simple one - we streamline and simplify the system to be more efficient. From now on we use only one shared umbrella term for each broad category: for example, "Song" and "Songs" will now be replaced with the more accurate "Music" when referring to pieces of music used in episodes, as this term covers pieces that do not use vocals or lyrics - which is the case for the majority of VT-related songs, with the exceptions of certain covers which add lyrics to Jordan's songs. We also need to improve how Videos, Characters, Locations, Weapons, and Real People are listed in categories, in much the same fashion as the previous example.

Additionally, I would like to stress the importance of using sub-categories to divide topics that are related to a particular subject but the contents of which do not directly relate to the super-category, if you catch my meaning.